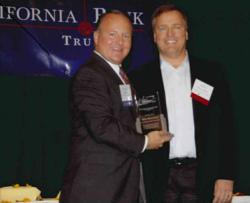 “Mike Manclark’s vision and leadership have propelled Leading Edge into the largest aircraft painting company in the world, counting virtually every major airline as a customer,” said Richard Reisman, publisher, OCBJ. “During the past few years, the company has grown revenue by more than 14% in what’s widely been recognized as one of the toughest periods in history for commercial aviation. It’s accomplishments like these that warrant Manclark’s inclusion in our Excellence in Entrepreneurship Awards.”

Originally founded as an aircraft detailing business at John Wayne Airport, Manclark quickly expanded the business to accommodate a growing need for premium aircraft painting. Within a few years, the company amassed major contracts with clients such as Delta, Continental, United, Air Canada, Southwest, the U.S. Military and even NASA. Today the company boasts state-of-the-art hangars in eight cities across America, revenues of more than $46M, and a total of more than 1,300 employees.

“This has been another landmark year for Leading Edge, and we are honored to have our accomplishments recognized by the OCBJ,” said Manclark. “We are proud to be part of a community that values and supports entrepreneurship and innovation.”